Problems from Lasik? File a MedWatch report with the FDA online. Alternatively, you may call FDA at 1-800-FDA-1088 to report by telephone, download the paper form and either fax it to 1-800-FDA-0178 or mail it to the address shown at the bottom of page 3, or download the MedWatcher Mobile App for reporting LASIK problems to the FDA using a smart phone or tablet. Read a sample of LASIK injury reports currently on file with the FDA.

These photos were taken through a slit lamp (bio-microscope) after instillation of fluorescein dye. A blue light is used to illuminate the dye, which stains damaged areas of the cornea. Dye settles into the margin of the LASIK flap, which never heals. This open wound exposes patients to life-long increased risk of infection.

The photo below is an eye with two LASIK flaps. Five years ago during the original LASIK surgery the device that cuts the flap (microkeratome) malfunctioned, and the procedure was aborted. A second LASIK surgery was performed one week later. The two dye-filled curved lines are the original malformed flap. The larger circular line extending around the circumference of the cornea is the second LASIK flap. The patient's vision is severely distorted as a result of these surgeries. The patient is unable to see better than 20/70 with glasses. 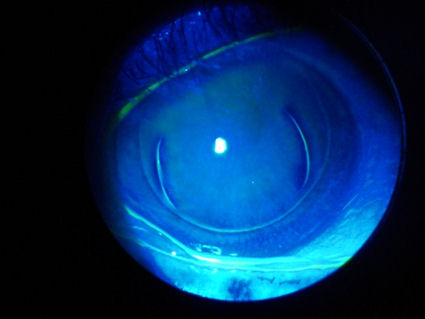 The photo below shows an irregular LASIK flap resulting from eye movement. Patient was told after the procedure that the proper equipment to prevent eye movement was not in place. Procedure had to be performed twice. Note the irregular shape of the flap.

The next photo shows a cornea with two LASIK flaps. Notice two arcs extending from 6 o'clock to 2 o'clock. The patient had a second LASIK procedure several weeks after primary LASIK, and the surgeon cut a second flap within the original flap rather than lifting the flap. 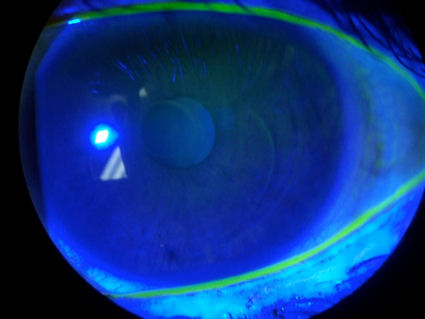 Below is a cross sectional image of the cornea of a post-LASIK patient wearing a rigid scleral contact lens. The patient had LASIK in 2006. The green arrow points to the contact lens surface. The red arrows point to damage to the cornea by creation of the flap. This cornea is structurally compromised. The patient's vision is very distorted without the lenses. The patient also suffers from extremely dry eyes. Click picture for a larger image.

Surgical mishaps during the cutting of the flap may result in serious damage to the cornea with vision loss. Images of some flap complications may be seen here: Link

Surface ablations such as PRK which do not require cutting a corneal flap are making a come-back with surgeons who wish to avoid dealing with flap complications.

PURPOSE:: To analyze the clinical features and the risk factors leading to formation of flap buttonhole during laser in situ keratomileusis (LASIK) and the postablation visual outcome.

METHODS:: Medical records of all eyes that developed flap buttonhole during LASIK were retrospectively reviewed. Pre-LASIK measurements and intraoperative parameters were analyzed to predict the risk factors.

RESULTS:: A total of 944 eyes underwent LASIK during the study duration. Four eyes (0.42%) developed partial thickness flap buttonhole. Thin-flap LASIK (flap thickness </=90 mum) was performed in 230 eyes. The incidence of buttonholes in thin-flap LASIK cases was 1.7% (4 of 230). LASIK procedures were performed at a tertiary eye institute between October 2006 and December 2008. The mean age was 31 +/- 8.7 years. Preablation mean spherical refractive error in the affected left eye was -7.8 +/- 1.2 diopters (D), mean steeper axis keratometry was 44.0 +/- 1.56 D, and the mean pachymetry was 520 +/- 16 mum. Buttonholing in the flap occurred in the second (left) eye of all 4 cases. All cases had undergone thin-flap LASIK with 90-mum blade using the Moria M2 microkeratome. Flap diameter was +2/7.5 and 0/8.0 for 2 eyes each. Twelve weeks after the initial procedure, transepithelial phototherapeutic keratectomy/photorefractive keratectomy was performed in all 4 eyes. Postablation visual outcome was 20/20 and 20/25 in 2 eyes each. One patient had a faint subepithelial scar at the last 1-year follow-up.

CONCLUSIONS:: Formation of flap buttonhole is significantly more common in the second eye and with the usage of Moria M2 microkeratome and 90-mum blade. In thin-flap LASIK, the practice of using the same microkeratome blade for the fellow eye, as is commonly followed at many refractive surgery centres, should be abandoned. Intraoperative subtraction pachymetry may be helpful in predicting the risk of buttonhole in the second eye. These precautions are especially mandatory in thin-flap LASIK irrespective of the other associated risk factors.

Excerpt: We describe the case of a 40-year-old female myope who presented for bilateral LASIK. Intra-operatively, the microkeratome oscillating pin broke during flap creation resulting in the separation of the disposable blade from the motor. This resulted in an irregular flap with missing pieces. The procedure was abandoned and the macerated partial flap repositioned as best as possible. The patient recovered a BCVA of 6/7.5. The manufacturer has since reported taking corrective measures to prevent this problem in the future. This case is a reminder that despite care and maintenance by user and manufacturer, extreme and rare hardware malfunctions can occur.

METHODS: This retrospective review identified eyes that developed buttonholed flaps during LASIK. Preoperative, intraoperative, and postoperative data were obtained to identify factors predictive of this complication.

RESULTS: Of 4250 primary LASIK procedures, 17 eyes (0.4%) with buttonholed flaps were identified. Buttonholes occurred with the Hansatome microkeratome in 64.7% of eyes and with the Moria microkeratome in 35.3% of eyes, the incidence of buttonholed flaps was 0.62% and 0.19%, respectively (P = .03). Laser ablation was performed at the same time as buttonhole formation in 8 eyes (47.1%) and was aborted in the other eyes. Retreatment was performed in 10 eyes (58.8%); of retreated eyes, 6 had repeat LASIK and 3 had surface ablation. The final spherical equivalent refraction was -0.38 diopter +/- 0.79 (SD). Two eyes had a final loss of more than 2 lines of best corrected visual acuity (BCVA). The mean loss of BCVA lines was 0.72 in eyes that had complete LASIK, 0.62 in eyes that had aborted LASIK followed by retreatment with repeat LASIK, and 0.80 in eyes that had aborted LASIK followed by retreatment with surface ablation.

CONCLUSIONS: Buttonholed flaps occurred more frequently in the second of 2 consecutively treated eyes. Microkeratomes that produce a larger diameter flap were more likely to produce flap buttonholes. The least loss of BCVA was achieved when LASIK was aborted and then repeated after refractive stability.

PURPOSE: To report the clinical features and outcome of eyes with flap buttonhole during LASIK.

METHODS: A retrospective review was performed to identify eyes that developed flap buttonhole during Hansatome microkeratome translation. Pre-, intra-, and postoperative data were obtained to identify factors predictive of buttonhole.
RESULTS: Five patients with buttonhole were identified from June 2001 through September 2002 (5 [0.06%] eyes of 7672 primary LASIK procedures). Mean patient age was 49.2 +/- 11.3 years (range: 37 to 66 years). Mean preoperative spherical equivalent refraction was 4.92 +/- 2.90 diopters (D) (range: -2.25 to -9.50 D). Mean keratometry was 45.59 +/- 1.15 D (range: 43.90 to 47.60 D). All 5 flap buttonholes occurred in the second of 2 consecutively treated eyes (P = .03). Buttonhole occurred in 2 (0.26%) of 778 eyes where the 160-microm microkeratome plate was used, and 3 (0.06%) of 4350 eyes where the 180-microm plate was used (P = .16). Two eyes received laser ablation at the time of buttonhole formation. In the untreated cases, the buttonhole flap itself caused a myopic spherical change of -0.50 D and 0.70 D of astigmatism. One of 5 eyes lost 2 lines of best spectacle-corrected visual acuity; this eye received laser ablation immediately after buttonhole formation.

CONCLUSIONS: Buttonholes are significantly more likely to occur in the second of two consecutively treated eyes. A new blade for the second eye when the flap in the first eye appears to be thin should be considered. Caution should be exercised when considering laser ablation immediately following buttonhole formation.