If you experienced problems after SMILE or another form of vision correction surgery, you are invited to join the discussion on FaceBook.

Bad outcome from SMILE? File a MedWatch report with the FDA online. Alternatively, you may call FDA at 1-800-FDA-1088 to report by telephone, download the paper form and either fax it to 1-800-FDA-0178 or mail it to the address shown at the bottom of page 3, or download the MedWatcher Mobile App for reporting LASIK problems to the FDA using a smart phone or tablet.

ReLEx SMILE is a form of refractive eye surgery intended to correct the way the eye focuses light. SMILE is being touted as an alternative to LASIK and advertised by some eye surgeons as "flap free Lasik".

The U.S. FDA approved SMILE in September, 2016. Link to FDA press release Says FDA, "Common complications after [SMILE] surgery included debris at the site of tissue removal, dry eye, moderate to severe glare and moderate to severe halos." Link to Patient Information Booklet    Link to Professional Use Information
Other links on SMILE: FDA-approval of SMILE, Summary of Safety and Effectiveness of VisuMax laser for SMILE, Clinicaltrials.gov

SMILE is very similar to an older form of refractive surgery known as Automated Lamellar Keratoplasty, or ALK. ALK carried significant risks and side effects. The procedure was abandoned when LASIK was introduced.

The SMILE procedure uses a femtosecond laser to create a disc, or lenticule, of tissue within the cornea. The lenticule is separated from the overlying and underlying cornea with a thin blunt spatula. The lenticule is then extracted with forceps through a small corneal incision. The older FLEx procedure involves creating a corneal flap, like in Lasik surgery, to remove the lenticule.

Reported risks and complications of ReLEx SMILE include:

All previous and current forms of corneal refractive surgery, such as RK, ALK, PRK, LASEK, and LASIK have been associated with problems. SMILE will be no different. Eventually they are all abandoned to the junk heap of harmful, unnecessary refractive eye surgeries.

Practitioners who offer SMILE claim that it is safer than LASIK. It's a clever marketing ploy to overcome the fear prospective patients have of undergoing an irreversible surgery on their only pair of eyes. Eye surgeons made the same argument 15 years ago, 10 years ago, 5 years ago, and they are still making it today. It's a pattern -- when problems with one technology or surgical technique are exposed, eye surgeons blame old technology and move on to the next so-called upgrade or surgical variation (while abandoning their patients with problems). But eventually problems emerge with the new technique or upgrade. And the cycle continues. It's just commonsense -- surgically altering a healthy, normal cornea has always, and will always, lead to problems.

Our advice: Keep your glasses!

Although SMILE is new, cases of post-SMILE ectasia are already appearing in the medical literature. Below are a few citations of articles that report corneal ectasia after SMILE. (You can read the abstracts on PubMed.gov.) Clearly, eye surgeons who claim that SMILE does not weaken the cornea in the same way that LASIK does are either being dishonest or not knowledgeable about the procedure's risks. Either way, it should convince you not to be a guinea pig.

Surgeons who perform SMILE tell prospective patients that SMILE eliminates risks associated with a Lasik flap. Don't believe it! The photo below is an eye with epithelial ingrowth after femto-SMILE. The epithelial ingrowth can be seen just above the pupil. Click image to enlarge. 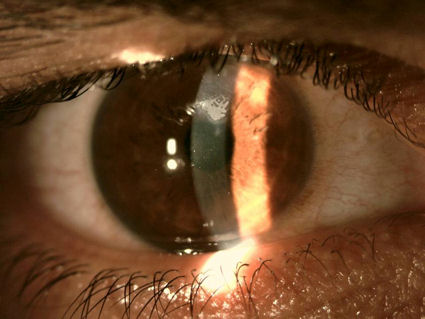 METHODS: This was a prospective, interventional, longitudinal case series. Forty-eight eyes of 24 patients underwent contralateral LASIK and SMILE. Corvis ST (Oculus Optikgeräte GmbH, Wetzlar, Germany) measurements were performed preoperatively, intraoperatively, and 1 week and 1 month after surgery. In LASIK eyes, the flap was cut but not lifted before intraoperative measurements. In SMILE eyes, the cap and side cut incision were made before intraoperative measurement. Thirty biomechanical variables were analyzed, assuming multiple comparisons.

CONCLUSIONS: Flap and cap cuts induced biomechanical weakening in patient corneas. The flap caused more weakening than the cap intraoperatively. However, biomechanical differences between LASIK and SMILE eyes were similar after removal of tissue and ongoing wound healing.

2018 study finds that SMILE laser eye surgery is not safer (biomechanically) than LASIK and is even less safe than LASIK for low myopia.

Background: SMILE is a relatively new technique to correct moderate and high myopia. The limits of SMILE are yet unknown.

Results/Discussion: Recently presented axial 2D-strain-stress measurements indicate that the biomechanical impairment of the cornea after SMILE and LASIK is comparable. The difference in elastic moduli is statistically not different. The visual rehabilitation after SMILE takes significantly longer (weeks) compared to LASIK (days). The refractive success rate of SMILE is still not as good as that of LASIK (88% vs. 95% within ±0.5 D) but SMILE has caught up during the past years. The problem of reoperations is not yet solved.

Conclusion: More technical and clinical improvements are required to make SMILE comparable to LASIK regarding success rate and patient convenience. The biomechnical argument pro SMILE has turned out to be weak. To achieve the improvements a commercially competing femtosecond laser would be of advantage.

METHODS: In this retrospective review of a consecutive clinical case series, all patients who had a complicated ReLex FLEx or ReLEx SMILE procedure at the Cornea and External Disease Department at the Instituto de Oftalmologia Fundacion Conde de Valenciana, Mexico City, Mexico, were included. Demographic characteristics, type of complication, and final refraction and visual outcomes were recorded.

RESULTS: Our study comprised 94 eyes in the FLEx group and 160 eyes in the SMILE group with a mean follow-up period of 36 months. In the FLEx group, 15 eyes (18.3%) presented surgery-related complications, including suction loss, black spots, bubbles in the interface, and lenticule misdissection. In the SMILE group, 43 eyes (26.9%) had complications, including an epithelial defect (the most frequent), suction loss, opaque bubble layer, cap rupture, and lenticule rupture.

CONCLUSIONS: Although ReLEx complications can occur, most of them are related to inexperience and have a favorable resolution with no lasting effect on the patient's final visual acuity.

CASE PRESENTATION:
A 41-year-old man who underwent SMILE 4 years prior developed DLK in the right eye 1 day after he was struck in the eye by a finger while playing with his son. Slim-lamp microscopy and anterior segment optical coherence tomography (AS-OCT) were used to evaluate the cornea of the right eye. Slit-lamp examination of the right eye revealed epithelial exfoliation and stage 3 DLK with diffuse, dot-like, granular haze in the interface between the cap and stromal bed. After intensive treatment with topical corticosteroids, the DLK resolved and corneal transparency was achieved.

CONCLUSIONS:
This case indicates that DLK can occur several years after SMILE. Ocular trauma may be a risk factor for the development of DLK. The prognosis is usually favorable with early diagnosis and treatment with topical corticosteroids.

Disclaimer: The information contained on this web site is presented for the purpose of warning people about complications of LASIK, ReLEx SMILE, and other forms of refractive surgery prior to surgery. Patients experiencing problems should seek the advice of a physician.